To have a complete understanding of the opportunities and challenges the cloud era poses for resellers, MSPs and the Channel in general, it makes sense to study multiple concurrent forces at play in the IT landscape which are driving change.  Moreover, this whitepaper highlights the Channel opportunities in the specific area of cloud based messaging and collaboration software.  It seeks to answer the key questions of – What is the role of the Channel in the cloud era? Why cloud messaging and collaboration? Why now?

The model of software delivery is in the midst of transition from traditional on premise server based software to software deployed over the internet.  This is in interplay with the emergence of new mobile technologies; a business environment where companies have to work in a distributed network of teams, partners and clients; and changed end user needs and expectations.

All these forces are coming together, and impacting traditional relationships between vendors, business users and the Channel. But one thing is for sure – the Channel remains as relevant as ever. The reason quite simply is, end users still want to be served through the Channel, and continue playing their roles of trusted advisors. The whitepaper studies these multiple forces of change, before going on to the specific question of – how does this all impact you – the VAR or MSP? Then it goes on to the unique Channel opportunities and new revenue streams in cloud messaging and collaboration. Finally, you learn about the vendor landscape in cloud messaging and collaboration, and how partnering with HyperOffice offers you some exclusive advantages.

Multiple forces of change are underway in the IT Market, profoundly impacting all players, including customers, vendors and the Channel.

Software will never be the same

The closing years of the first decade of the 21st century have seen a sea change in how companies approach, procure and manage business software. Traditional on-premise and server based software, known to be complex and expensive, has started to lose favor in the face of recessionary pressures. Accessing IT infrastructure, software, and data remotely over the web is now a requirement in modern business environments, which increasingly demands flexibility and working in a wider network of customers, suppliers, vendors, partners and regulators. “Disruptive”, “Techtonic shift”, “fundamental structural shift” are some of the phrases being used to describe this phenomena. 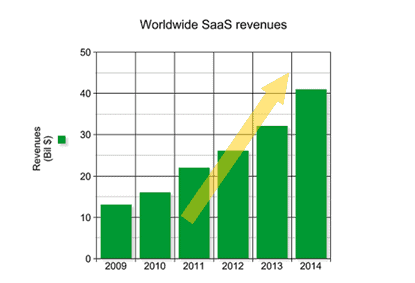 After gathering momentum over the last 5 years, the “cloud” and “software-as-a-service” are now more than mere buzzwords, witnessing massive adoption from all sectors of the economy, particularly the small and medium business segment. In a recent report, IDC predicts that over 2010-2014, SaaS will grow six times faster than traditional packaged software, reaching over $40 billion in revenues by 2014.

This is causing a fundamental structural shift, as evidenced by the fact that IT departments and software giants like Microsoft, IBM, SAP and Oracle are scrambling to incorporate the cloud into their strategy.

If the actions of the biggest global software vendor are anything to go by, Microsoft recently put its entire weight behind the launch of cloud-based Office 365, even at the cost of potentially cannibalizing its on-premise software revenue streams. CEO Steve Ballmer further underlined this by revealing that 70% of Microsoft’s 40,000 employees are working on cloud related efforts – a number that may increase to 90% in 2011. 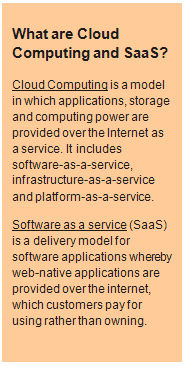